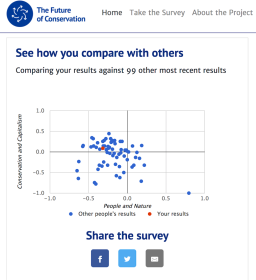 As members of an interdisciplinary lab, I initially thought our views of conservation would be a little more divergent. But, after taking the Future of Conservation Survey (like a personality test for conservationists), it seems we collectively straddle the left-hand side of the Conservation and Capitalism x-axis; meaning that we view natural and social systems as inseparable and intertwined. We fell into the New Conservationists or Critical Social Science groupings (for a comprehensive breakdown of the groupings visit the description page).

Where we differ and only just slightly, are in our views the roles that market-based mechanisms, ecosystem services and corporations play in conservation. Our group is made up of wayward physicists, ecologists, political scientists, and practitioners whose epistemologies for the most part reflect pragmatism rather than strict ideologies and I guess this pragmatism is the reason why we were all mostly aligned.

As you can see from my red dot on the graph I fall in the upper left quadrant, the New Conservation “camp”, but only just so. There were certain statements in the questionnaire such as “Economic arguments for conservation are risky because they can lead to unintended negative conservation outcomes” that I think most conservationists agree with even if they, as I do, support the limited use of financial instruments or economic case for the conservation of biodiversity. Economic incentives can work but they often do not (Lim et al. 2017, Selinske et al. 2017)—context matters.

At least from the snapshot of other’s results that took the test before me, it seems that most would agree with Georgina Mace’s Science editorial Whose Conservation? in which she posits that we are currently in a People and Nature framing of conservation, celebrating interdisciplinarity, both social and ecological sciences and concepts of change such as resilience and adaptability; rejecting a nature for people and “Half-Earth” framing of conservation. The debates that mark conservation—new conservation vs. traditional conservation; land-sparing vs. land sharing—are not black or white and it is likely that many conservationists have nuanced views of conservation, and fall across the spectrum.

Debates are a fixture of conservation science, because we are passionate about our work and the direction of conservation as evidenced by our recent disagreement with an article published by Peter Karieva and Emma Fuller. Conservation practice emerged as a ‘big tent’ movement encompassing the divergent views of visionaries such as Muir, Pinchot, and Leopold, and this continued diversity in conservation science should be supported, critiqued and embraced as the conservation community for some time will remain an assemblage of philosophies and approaches to conservation policy and implementation.